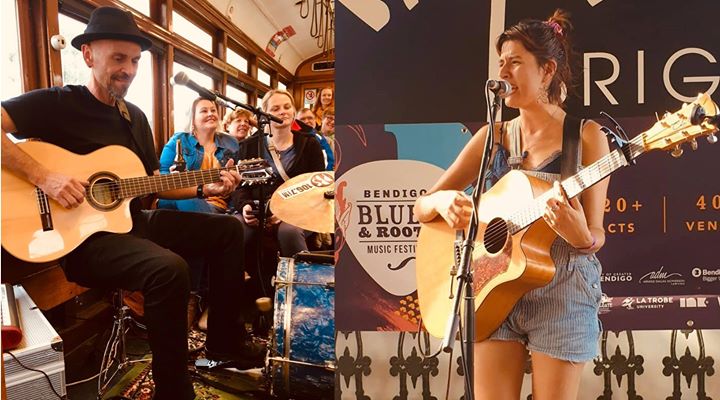 Enjoy the sights of Bendigo’s architecturally stunning CBD from on board the sensationally restored vintage W Class tram, while being serenaded by two brilliant acts:

Sharing her story with the Melbourne music scene, Serbian-born songstress Maja is gaining quite a reputation for her eccentric character and refreshingly honest performances. Maja is shaking up the music scene with her commanding stage presence, thought provoking questions and spoken word poetry where she opens a few veins and shares intimate parts of herself. Having released two EP’s and her last single “Woman I’ve Become”, she is challenging her generation and cutting through the noise. Her set breaks boundaries, touches on belonging and family, self acceptance and becoming the person you want to be. 2019 saw Maja touring Europe and publishing a book of poetry called “Coming Home to Yourself.” Questioning life’s journey, 2020 will see Maja releasing two singles and her debut album “I’ll Get There” which she will be touring nationally in July.

Having grown up in the tough, migrant, working-class northern suburbs of South Australia in the sixties and seventies, King was exposed to the musical tastes of other British migrants – names such as Muddy Waters, Bob Dylan, Howling Wolf, Leadbelly and Robert Johnson. He later earned a living as a truck driver, storeman, labourer, salesman and teacher and has drawn upon this myriad of experiences as fodder for his songwriting.
With a few stories, an old guitar and kick drum, Tony J King creates a ramshackle music that has its roots in the street-corner blues and folk of yesteryear. Slow-burnin, low-fi urban myths, murder ballads, half-truths, dark gospel and random fascinations are represented in quirky musical tales honed from a pre-occupation with the unusual, the exotic and the downright bizarre.